Crypto-Gram recently recommended a study by Utica College's Centre for Identity Management & Information Protection. They do not limit their interest in personal information to the abstract: indeed they require your name, job title, company and email address if you would like to read the study.

I just released Loudmouth 1.3.2. This has been some time in the making: the goal has been to provide new features and keep compatibility with the stable 1.2 branch while Loudmouth 2.0 matures. We managed to add support for STARTTLS encryption, SASL authentication and DNS SRV lookups with minimal additions to the API. Together, these changes mean that Loudmouth will Just Work with your Jabber account in more cases, and that Loudmouth complies better with the XMPP 1.0 standard.

Users of Gossip and Telepathy will benefit from these improvements, and they should land in Maemo in the Diablo timeframe. We anticipate some stabilisation work on the 1.3 branch followed by a stable 1.4 release.

Senko deserves much of the credit for this release; he worked hard to make this happen. Thanks to Micke for supporting me in getting my first Loudmouth release out. Thanks also to Nokia, who supported Collabora's work.

Of these books, only the last is edible.

Neither of these is edible.

Turns out turning a bicycle into a chopper is not so complicated. 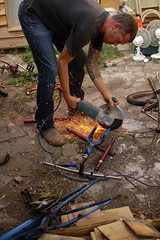 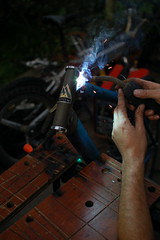 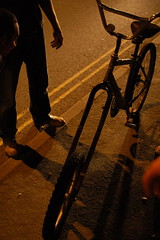 The Telepathy API has until recently only been available as a single large HTML document. The HTML is generated from D-Bus introspection XML with extensions for stuff like enums. I hacked up a conversion to DevHelp's index format, meaning you can use DevHelp to browse the documentation.

This might also work for other D-Bus APIs; I haven't tried.

(If you're developing using Gtk/GLib/Cairo/Pango/GStreamer/etc. and not tried DevHelp, I heartily recommend it. It's really handy, especially with the Ctrl-S shortcut.) 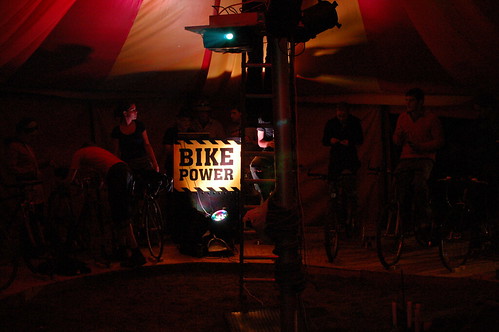 Recently I got involved with a local group, the Magnificent Revolutionary Cycling Cinema. The idea is to use bikes to generate electricity, and to use that as an instrument for education, in particular about sustainability. We just had our first outing at The Big Chill, a three-day music festival.

Eight of us cycled from Cambridge to the Big Chill site in Herefordshire, a journey of roughly 130 miles. Many others arrived by other means to take part. Once we got there, we set up a tent with a platform for the bikes, a central console for managing the power generation, a projector and a pair of speakers. This took the best part of a week.

By some amazing coincidences, many people with ties to the project happened to be at the festival:

As for the cinema: in general, reception was very positive. Many festivalgoers made the trek up the hill from the festival to visit us, and people were generally keen to get on a bike for a bit and feed our machine. We were very happy that it all actually worked; as it turns out the power we generated was pretty close to what we needed to keep running. (Odd, and somewhat disquieting, to think that the tent housing our roughly 330 Watt show was shone upon by a number of 1000 Watt lights.)

By the end, we were all exhausted from the 10pm-3am shifts, and somewhat sad at having to take it all apart. Nevertheless, I had a wonderful time. We learned a lot from our first excursion, and got lots of ideas for future improvements. Everyone involved seems eager to take the project forward to further success.

Though it's been a while since Guadec, it's been a rather busy time since so I've only just got around to putting up the photos I took there. Shortly after getting to Birmingham, I gave in to the temptation of a 30mm f/1.4 Sigma lens. Guadec was great for testing it on people.

Matthew Garrett has a birthday soon. As birthday is a pretty good excuse to have people come to your house and drink. So, if you're in Cambridge on July 13th, come to 6b Fair Street with some booze or food around 9pm, and help Matthew forget how old he is.

When people criticise Wikipedia, they often cite specific errors in articles as evidence that its overall quality is poor. The irony in this is that it encourages Wikipedians to fix those exact errors.

For instance, in his essay “The Faith-Based Encyclopedia”, Robert McHenry ― one of Wikipedia's most ardent critics ― pointed out ambiguities in the article on Alexander Hamilton:

While the day and month of Hamilton's birth are known, there is some uncertainty as to the year, whether it be 1755 or 1757. Hamilton himself used, and most contemporary biographers prefer, the latter year; a reference work ought at least to note the issue. The Wikipedia article on Hamilton (as of November 4, 2004) uses the 1755 date without comment. Unfortunately, a couple of references within the body of the article that mention his age in certain years are clearly derived from a source that used the 1757 date, creating an internal inconsistency that the reader has no means to resolve.

I think McHenry underestimates Wikipedia's readers, and I suspect that when people notice inconsistencies they are smart enough to refer to other sources. At any rate, the article now devotes an entire paragraph to the question, including two citations. McHenry acknowledges this problem in a later essay (while criticising a different article):

By the time you read this, the entry will likely have been corrected, and some Wikipedians will proclaim this as another proof of concept. It does not occur to them to wonder how many people may have come upon that entry in the more than three years it has existed and relied in some way on the misinformation in it. They nearly got me.

He was right about one thing: the error in the article was fixed that same day. But I think this says something positive about Wikipedia: that it is willing to acknowledge mistakes and try to fix them as soon as they are discovered. For as long as McHenry continues to points out errors, there will be Wikipedians on hand happy to fix them.